Part 3 of the documentary All’s Well and Fair II (2006 version) takes you straight from 1996 to 2006 to see what became of the three punk moms and their little children. This episode also introduces the topics of the series.

All’s Well and Fair juxtaposes the lives and ideals of 3 single punk rock moms during the 1990s with their realities and opinions ten years later – giving a unique perspective on alternative culture, growth and identity.

Please let us know what you think… or just answer the question for this episode: Which topic (listed in the episode) are you most interested in? And why that one? 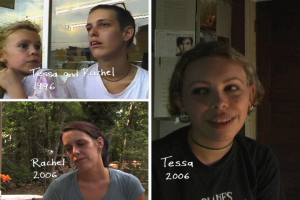