Part 2 of All’s Well and Fair II (2006 version) features the song with which the three single punk moms won a local F*** The Government song contest.

All’s Well and Fair II juxtaposes the lives and ideals of 3 single punk rock moms during the 1990s with their realities and opinions ten years later – giving a unique perspective on alternative culture, growth and identity.

Please let us know what you think… or just answer the question for this episode: Has any song ever inspired you to action? If so, which one? Or how about a film or a book? 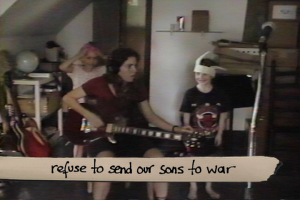